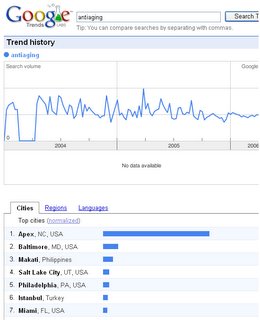 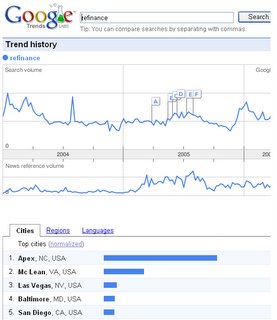 Google Trends is a great tool for understanding the current search zeitgeist and how it breaks out geographically. However it is not without its peculiarities.

According to these screenshots, Apex, NC is far and away the center of in refinance and antiaging searches on the internet.

But Apex is just a small town in North Carolina. What is going on, Google?
Posted by Admin at Saturday, July 29, 2006 No comments: 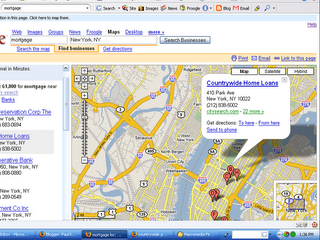 Searching for my own company with city and state American Home Mortgage now brings up a huge mapped listing at the top of the search engine results page.
Posted by Admin at Monday, July 17, 2006 No comments:

Here it is again, short messaging giving you... food. As if it were hard to get food in Manhattan, you can now text your order via Gomobo and they'll charge your credit card and place the order for you.
Posted by Admin at Monday, July 10, 2006 1 comment:

The buzz over .mobi is just another indication of where we're headed. Even now, the concept of "cyberspace" (sounds so 1993), for most people is limited to sitting at desktop or laptop, staring at a screen. How will 2007, 2008 begin to look, as we begin to get unteathered....an Ipod that's always online (rumored to be in development by Microsoft)? Adsense served to mobile phones based on next generation Dodgeball GPS type platform? more than likely.
Posted by Admin at Sunday, July 09, 2006

Wikipedia is such a great analogy for our current take on "truth". As soon as The New York Times and other media outlets announced this morning of the untimely death of Kenneth Lay, conspiracy abounded, virus like - across the internet. Every blogger had a theory. Later that day Reuters
published an interesting article about how Lay's biography in Wikipedia was modified scores of times throughout the day, colaboratively limping its way to some sort of definitive conclusion.
Posted by Admin at Wednesday, July 05, 2006 1 comment: